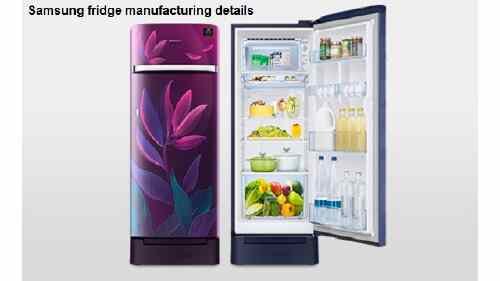 You know Samsung! Right, and I think almost everyone knows it. But when it comes to manufacturing details, everyone will get a big question mark in mind. Hence, you’re here to find information on the question; Samsung fridge/refrigerator made in which country?

Being one of the largest companies, Samsung has developed itself as a leader in the field of electronics. In the electronic sector, Samsung’s product portfolio is vast and not limited to one country. Some of us used many Samsung products, and being users, we found Samsung to be the best brand. However, one who never used it revolves around many questions.

They are the first choice for many consumers due to their quality and innovative products. Samsung Company is involved in various product categories and advancing every product with its R&D and technology. They continue to dominate the domestic appliances sector with an expanding consumer base.

The nicest thing about Samsung, in my opinion, is that they provide better after-sales services and customer services, whether you make online or offline purchase.

Samsung fridge made in which country? Where are Samsung refrigerators made?

Samsung has been putting more emphasis on strengthening manufacturing capabilities since its inception. So far, with the installation of new factories and production facilities worldwide, Samsung has a well-distributed supply chain and management system.

Recently, Samsung reinvested in Indian refrigerators plants and established new component production facilities. It’s not just in India but in countries like Poland as well.

In India, Samsung refrigeration manufacturing began with the Delhi facility and later In 2010, Samsung announced about second refrigerator facility at Sriperumbudur, Chennai. The Chennai facility of Samsung was developed with hi-tech and advanced technologies.

As news reports in 2022, Samsung Electronics announced its new compressor manufacturing plant in India. Samsung has invested Rs. 1,588 crores in that, and it will be able to produce 8 million compressors annually.

Through this compressor production plant, Samsung electronics will have the advantage of providing compressor components to its Indian refrigerator plant. In the future, they want to expand it more and also interested in exporting of a component to other countries. 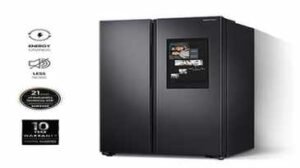 Speaking of other units, the Samsung electronics facility in Poland, which manufactures washing machines and refrigerators, will receive new investment in 2022. According to the news, Samsung will invest 900m zloty in the existing plant in Poland.

Samsung, in the refrigeration sector, does so many such developments. I kept the information short and straightforward, so it’s all about Samsung refrigerator manufacturing.

Is Samsung fridge made in India?

Yes, Samsung has two factories in India: one manufacturing facility at Delhi and the second one is at chennai. Samsung manufactures refrigerators in India, as it does in other countries. So, they make Samsung fridges in these Indian factories. However, we can’t identify or predict every components country of manufacture or where it came from. Its because samsung produce refrgerators and their parts worldwide.

1995 – Samsung produced a refrigerator containing a separate fridge and freezer. This is the exact turning point for the Samsung refrigerator business. With saving energy and hi-tech cooling system, it has gained quick popularity in the Korean market.

1997 to 1999 – they began selling other than Korea. 1999, they exported refrigerators to the United Kingdom. Therefore, the Journey taken by Samsung electronics, specifically for refrigeration, went like this.

Samsung’s electronics division was established in 1969. Samsung electronics also played a significant role in the Samsung group from many angles.

It has a well-established overseas network and assembly lines in more than 70 countries, which has been a significant factor in the growth of Samsung Group.

When it first began operating in the refrigeration industry, Samsung was not as well-known as it is today. However, when LG launched the fridge in the Korean market and it became popular in a short period of time. This is where Samsung’s foray into the refrigerator sector began.

Are Samsung refrigerators good? Is Samsung a good fridge brand?

How is Samsung fridge/refrigerator a good option for Buy? No doubt Samsung has far better technology that fills your refrigeration need, but more than that, they provide proper after-sale services compared to others. Samsung fridges are best to choose as household appliances because of the following three things –

Customer service and After-sale services – After purchasing a Samsung refrigerator, if you found any problem or want to contact customer care, just do the following things: register serial number and just call from your register mobile number to the customer care to show them the details. Further, they will take your details and do the rest of work. On the system, you can get all your details. These all thing shows Samsung has efficient customer service. It’s one of the important points.

Premium and price-sensitive models – In comparison, Samsung is a good brand in providing more variety of buying options where one can see and buy models of different sizes and prices as per their wish.

Warranty, technology, and features – you will get 10 years warranty on the Samsung fridge compressor. Technologies like changing of zones, inverter technology, twin cooling system, Quatro Cooling System give you 360-degree advantages for your use.

Are you searching for buying Samsung fridge? Click here to buy from Amazon.

LG or Samsung refrigerator, which is better in India?

LG and Samsung both are belongs to same country South Korea. Both LG and Samsung refrigerators are loaded with quality and advanced features. You can’t say that either one is far better than the other. Of course, everyone’s preferences and design choices are different, so some may like Samsung, and others may like LG.

I will add some quick comparisons: first, I want clear that choices and selections can vary from person to person. At last, every purchase depends on the buyer’s end.

Design and style: As I said, Lg and Samsung offer fairly similar styles, features, and designs. However, if you want to compare them closely, Samsung’s designs seem slightly better while Lg’s innovations are marginally superior.

Digitalization and Wi-Fi connectivity: You can get both features in a premium range of refrigerators, whether it’s Samsung or LG refrigerator.

Specialty in features: Since both offer many features, I will name only special ones that set them apart.

For LG–Smart diagnostics and Insta view – Insta view door to door technology – Without opening the fridge door, you can see everything within if you knock on the glass door of the fridge twice.

As per the news, In October 2022, Samsung India recorded 32% electronic business growth while LG Electronics expected around 30%. According to reviews and consumers, Samsung and LG are now leading the market in terms of sales.

Conclusion on Samsung fridge – made in which country?

I believe after reading the whole article, the next question won’t come up again; Samsung fridge made in which country?

In this article, I have taken more efforts to share the best possible information with you.