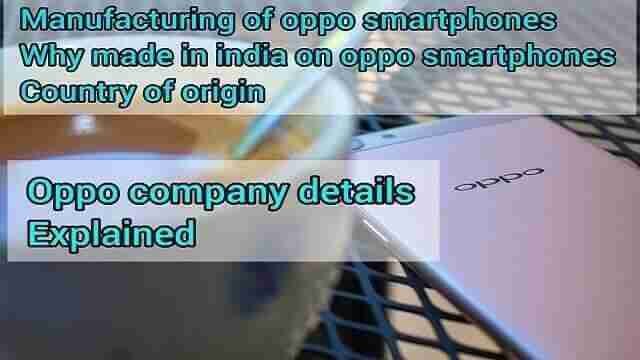 Oppo Company Belongs To Which Country? and why Oppo Made in India? People want answers to many such questions. So, get exact answers here.

Let’s take a look at Oppo Company Manufacturing, Origin Country and owner in this article.

Some people think that this company makes smartphones in India so they consider it as Indian but there is no such thing so I will reduce all such misconceptions.

I will now share the information you need and if you have any doubts while reading or have something to say, let me know in the comments.

Table of Contents
1. Is Oppo an Indian company?
Oppo Company belongs to which country?
2. Is Oppo made in India?
3. Why ‘made in india’ written on oppo smartphones as it belongs to country china?
4. Conclusion about Oppo: Chinese or Indian?

1. Is Oppo an Indian company?

Oppo Company belongs to which country?

Oppo is a Chinese Smartphone and consumer electronics brand launched in 2001 in Dongguan, China. Tony Chen is the founder and CEO of Oppo.

BBK Multinational Corporation Electronics Group is the parent organization of Oppo Company. Not only Oppo Companies like Vivo, Realme and One Plus also come under the ownership of BBK Electronics, china.

As I said, oppo was registered in china 2001 and launched in the worldwide market in 2004. Along with China, they have a manufacturing unit in Greater Noida, India.

The manufacturing capacity of the plant in India is 4 million per month. Oppo acquired the fourth position in the Indian Smartphone industry and also ranked at number four in the world.

In Q2 2020 oppo had market share of 9% in india. Oppo’s market share in India has been changing close to 8-12% since 2018. On the other hand, Chinese Smartphone company Xiaomi and South Korean company Samsung are taking continuous growth in market share.

Answer to your question is,

You may have understood all this but now the next question is why you see Made in India on a Chinese Smartphone.

Let us know the information behind Made in India on Oppo phones.

Yes, oppo smartphones are made in India but not completely. Understand that Oppo does not become an Indian mobile company as it makes mobiles in India.

Oppo does not make all the parts required for their mobile in India. Most of the parts are imported from China and assembled in India.  This gives the company both the tax benefits and the Made in India tag.

The ‘Boycott China Products’ campaign in the market is causing losses to Chinese companies.

Therefore, based on the tag Made in India, Oppo, a Chinese company, has been gaining significant and biggest advantage for marketing.

All Chinese companies have been using this formula to make Chinese products locally in India and sell them under the name Made in India.

3. Why ‘made in india’ written on oppo smartphones as it belongs to country china? 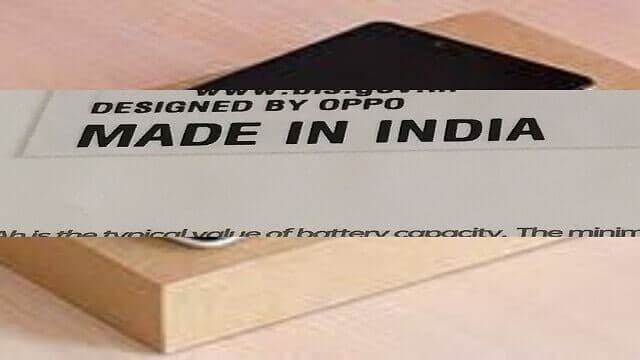 As mentioned earlier, Oppo is a Chinese company that makes smartphones in India.

One thing to keep in mind, if a company manufactures its products in another country, it would be mandatory for the company to write the name of that country on those products as per rule.

We will first clear the meaning of Made in India so that everything else can be understood.

Made in India – If a Chinese or foreign company manufactures or assembles a product in India, then their product will be called Made in India.

1) Xiaomi Chinese Company – The smartphones that Xiaomi manufactures or assembles in India called Made in India.

2) Samsung South Korean Company – Some of the smartphones that Samsung manufactures or assembles in India called Made in India.

The Indian government has taken very strict decisions in this regard. Because, if any consumer wants to buy a product, it is difficult to know the country of the brand and where it was made.

To prevent all this, the government has made some rules. The following rule of Government E-Marketplace is very important.

Government E-marketplace has made it mandatory for sellers to enter the Country of Origin while registering all new products on GeM.

The main aim behind this is that Indian consumers should know about each brand and they should not have any problem while buying any product.

Straight one line answer to main question is,

Even though Oppo is a Chinese brand, it manufactures or assembles smartphones in India, so ‘made in India’.

On the other hand, you have to understand that if any Indian company makes a product in China, it will be called Made in China.

4. Conclusion about Oppo: Chinese or Indian?

After reading this, you will definitely not face the question again Oppo company belongs to which country.

Oppo smartphones have ‘Made in India’ written on them, so don’t misunderstand that they are among the ‘Indian mobile brands‘.

Many people consider Indian companies to be Chinese while some Chinese companies are considered to be Indian. We need to understand big difference between Made in India and Indian Company.

The biggest reason is that people don’t have the right information about many companies. Hence I am writing articles about many such brands.

I hope that after reading the article, all the doubts about the Oppo company will be removed. If you have any further questions, please let me know in the comments.

Also if you want information about Vivo and Redmi company, you can click on the article below.

Vivo company belongs to which country.

Redmi company belongs to which country.