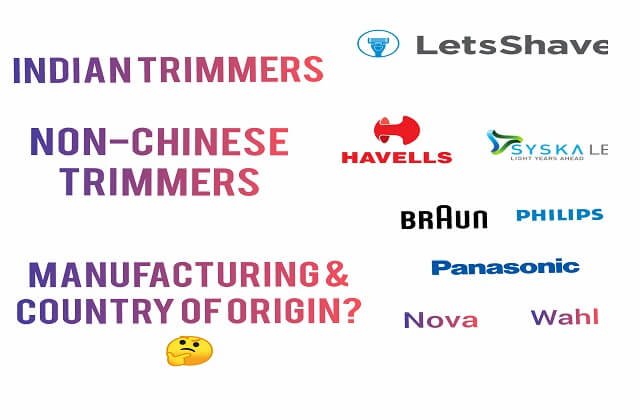 Manufacturing and ‘country of origin’ are the things that people want to know about Non-Chinese trimmers. Here you will find exactly the information you need.

Also, people are looking for information about Indian trimmer brands. Apart from this, if you search on the internet for Non-Chinese trimmers, you will only find the options to purchase. So, we have no idea where these trimmers are actually made.

That’s why I am writing all the details about Non-Chinese trimmers and Indian trimmer brands. So that you will not be confused again.

Even if it is true, when we buy one of these trimmers, it would have Made in China written on it. This makes people think that it should be a Chinese brand.

But in fact, none of the above brands are Chinese.

This raises the question of why Made in China is written on that trimmer?

Manufacturing of any product requires a lot of resources like material, financial aid, good infrastructure, manufacturing units, and other sources.

Therefore, for some reason, a company can’t make every part; in this case, the company manufactures the parts or products in other countries. Then the company looks for a country that can make a good product at a low price.

As always, China is a low-cost product maker with a large manufacturing capacity. That’s why so many foreign companies go there to manufacture products.

For example, Redmi and Oppo are Chinese brands but when they manufacture in India, they have to write Made in India. but that does not mean that they are Indian brands.

Similarly, these trimmer brands are not Chinese and China is not the owner of any brand.

The only thing is that some companies manufacture in China, so Made in China would have been written. But that doesn’t make them a Chinese brand.

Please don’t give all the credit to China because the rest of the jobs like design, quality, research, and much more are done by the company itself and they are the real owner.

Is Philips trimmer made in China?

The answer is no. Philips is a Netherlands brand. It has headquarter in Amsterdam. They mainly manufacture products in China as well as in India. Philips currently manufactures trimmers in China or you can say that it imports trimmer materials from China.

It has three manufacturing units in India such as Himachal Pradesh, Chennai, and Pune.

Home and kitchen appliances with female grooming products are mostly made in India. But male grooming such as beard trimmers and shavers are currently imported.

Although Philips is a brand from the Netherlands, it still makes some products in China.

Because of this, when you buy a Philips Trimmer, it has Made in China written on it. But that does not make it a brand of china.

Most importantly, I have heard that Philips will soon start trimmer and shaver manufacturing locally in India.

Is Wahl trimmer made in china?

Wahl is a brand of America which is based in sterling, lllinious. It has manufacturing units in sterling, Hungary, Germany, England, and china. Wahl hair clippers are made entirely in the US, not in China.

They only make trimmers in China for the Asian market. Also, They have packaging and assembly facilities in India.

Assembly and packaging are done by importing parts to China or India. Hence, in Asian countries, you find made in China written on trimmers.

Panasonic is a Japanese company which is based in Kodama, Osaka. Also, the company has manufacturing units in Japan and China. Mostly, they manufactures trimmers in china.

Is Nova trimmer a Chinese company?

Nova Electric is an Indian non-government company which is based in Karnataka. At the same time, they have been making trimmers in India and China.
It has a manufacturing unit in Bangalore, India.

Gadgetronics established in 2012. It is a leading brand located in Chennai, Tamilnadu.

It has a manufacturing unit in India. Mostly they import parts from Vietnam.

In the case of trimmers, they import Chinese trimmers and sell them under their own name.

Which trimmer is made in India?

Letsshave is a Chandigarh based brand founded by Sidharth S Oberoi. Sidharth started letsShave company in 2015 to fulfill the demand of Indian men’s shaving and grooming market.

Dorco is Korea’s leading brand in the grooming industry and has become the first Indian pair with a 10% stake in LetsShave.

So, letsshave make their products in India with the Korean partner Dorco. So, I am happy that the company is not solely dependent on china like other brands.

According to letsshave, they have approx 4, 50000 users base and growing day by day in the Indian grooming market.

At least in trimmer though, you get the best option to buy this.

Havells is an Indian electrical brand which is based in Noida, India.

On the Havells trimmer, you will see the ‘Made in China’ tag because they are manufactured in China.

Most of their electrical products are manufactured in India but this does not seem to be in the case for trimmers.

Syska trimmers made in which country?

Syska Group, a homegrown Indian brand with expertise in electrical equipment. Korea has been designing their trimmers from the very beginning. Mostly, Korea and china manufacture their trimmers.

In fact, it is an old company, but Syska LED came into the market with the Make in India scheme. It has three factories in India.

Many news or articles have said that syska will now start a manufacturing unit in India to manufacture razors and trimmers for men. I think it will start soon.

Most of the time you don’t buy foreign and Indian brands because you think it is a Chinese brand and that is what benefits China.

Most importantly, it takes a lot of things to make any device and no country can make everything.

At such times not only India but also foreign countries import parts from other countries. Not only that, but China also imports some things from India or Foreign. So understand that there is nothing wrong with this.

Now you know that China is not the owner of any country’s brand and it will never be. But if an Indian brand is using Chinese parts, you should not avoid it. Because if you don’t support your Indian brand today, how will it develop?

So, give time to Indian brands. Once their financial condition improves, they will manufacture parts in India themselves.

I have given you information about the current manufacturing countries but it may change. Because many companies have migrated from China due to corona disease and some are about to do so.

Lastly, if you want buy made in India or non-Chinese trimmer click on below articles,

2 thoughts on “Manufacturers of Non-Chinese trimmers and Indian trimmers”