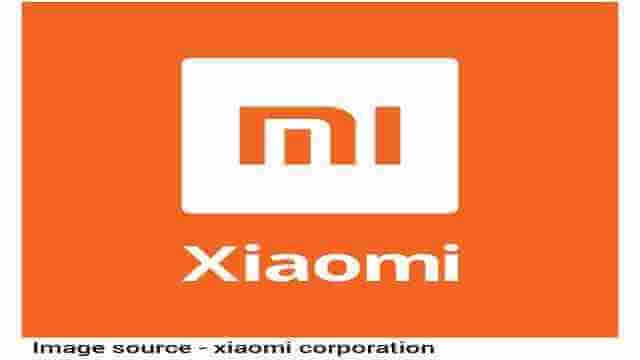 Xiaomi is the best selling Smartphone in India. But many people have doubt that is Xiaomi an Indian company? And Xiaomi phones truly made in India? Let’s know everything here.

We will also look at Xiaomi’s Country of Origin, Manufacturing Units, position in Smartphone Companies and Investment in India.

Xiaomi’s Smartphone has ‘Made in India’ written on it but it is not one of the Indian mobile brands.

Similarly, I have fully explained why their phones cannot be called completely ‘Made in India’.

After reading this article, you will definitely have no doubts about Xiaomi again. If you have something to say or ask, feel free to make a comment.

1. Is Xiaomi an Indian company?

Xiaomi is a Chinese electronic company that started in 2010. It has headquarters in Beijing, china. In 2014, the company launched in India with ‘Make in India’ program. Xiaomi company founded by lie jun and six others.

In 2018, three new manufacturing units were started at Sri City, Andhra Pradesh and a new campus at Sriperumbudur, Tamil Nadu. Expanding into this in 2020, the 7th Manufacturing Unit started in Chennai.

According to the company, these new manufacturing plants increased capacity in India from making one phones to three phones per second.

Also, Xiaomi had partnered with the world’s largest contract manufacturer, Taiwanese company Foxconn. Phones sold in India are mostly made in India through Foxconn manufacturers.

Along with smartphones, the company also makes electronic items such as TVs, headphones, smart watches and power banks, etc.

Initially, Xiaomi’s company had 5,000-10,000 employees in India. Xiaomi India Head Manu Kumar Jain has announced in his tweet that there are about 50,000 employees working in this company by 2020.

According to a report by ET Telecom, over 30,000 of these employees work in the manufacturing division.

In that According to the company, 95% of the employees are women.

‘Xiaomi India’ is the subsidiary of Chinese Smartphone Company Xiaomi. In the last few years, the company has been at the forefront of the Smartphone industry in India.

Clearly, Xiaomi is a Chinese company and not an Indian company.

2. Where are Xiaomi phones made?

Xiaomi has smartphone manufacturing units in China and India. As I said before, they have a partnership with Taiwanese giant Foxconn manufacturers. Xiaomi’s research and development center is in China, so phones are designed there.

So Xiaomi’s smartphones made at Foxconn’s manufacturing plant in China and Similarly in India at the Foxconn plant.

Let’s see in detail: Xiaomi phones really made in India? and why Made in India is written on their phones?.

3. Are Xiaomi phones made in India? 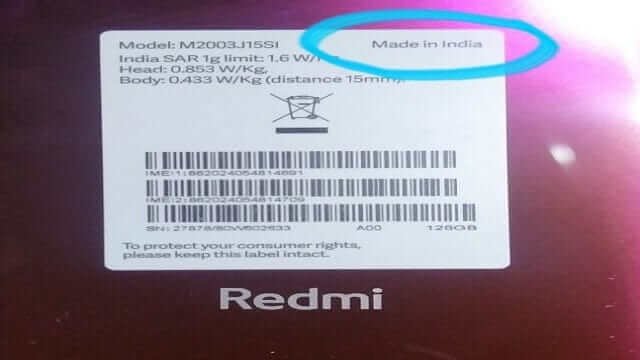 Yes, Xiaomi phones are made in India, but not completely. Xiaomi’s mobile parts are mostly imported directly from China to India.

According to Xiaomi India head manu jain, almost 65% of its component sourced locally. In addition, main component like PCB Sourced locally or made in India.

However, rest of the parts imported from China are assembled at Xiaomi’s plants in India. Since their R&D center is in China, all their advanced technology is used in these phones.

It would not be wrong to say that all their manufacturing units in India are actually assembly units.

Assembling phones in China and importing them to India is expensive for Xiaomi. So they get tax and other financial benefits by importing parts and assembling the mobile in India. Most importantly, the company gets the ‘Made in India’ tag which is beneficial for marketing in India.

Mostly, xiaomi phones are assembled in India to save import losses and taxes but not manufactured.

If you have any further doubts or want to ask, please comment.

Now let us know some of your doubts about Redmi. After that, let’s see the information behind writing Made in India.

Is the Redmi phones made in India?

Redmi which country brand – Redmi is a series of Xiaomi brands. So Redmi is not a separate brand or company, it is a part of Xiaomi. That’s why Redmi is the Chinese sub-brand of the main company Xiaomi.

Redmi made in which country – Since it is a part of Xiaomi, Redmi phones are made where Xiaomi has its plants and I have fully explained about that above.

Redmi made in India – yes but not completely as I have explained above.

4. Why made in India written on Xiaomi smartphones (not Indian company)? 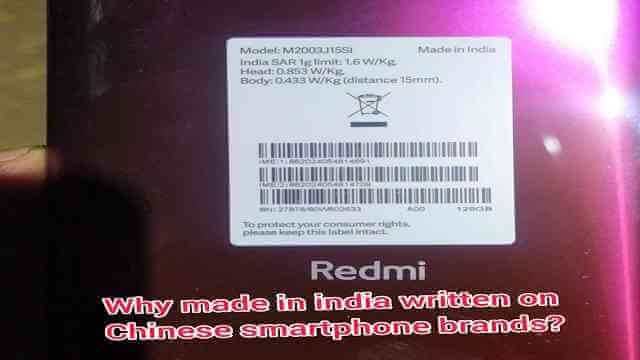 First start with basic info. ‘made in India’,

Made in India – If any foreign or Chinese company manufactures or assembles products in India, it would be mandatory to write Made in India on its products.

For example – you may have seen ‘made in India’ on Samsung phones because Samsung a South Korean company manufactures or assembles smartphones in India.

At the same time, the Indian government has issued some rules for all companies. So that it will be easy for the customer to get information about the product.

Country of origin – it indicates the where a product: manufactured, produced and processed.

Rule – According to GEM (government e-marketplace), “It is mandatory for seller to enter the ‘country of origin’ while registering all new products on GEM”.

If any company doesn’t follow this rule, their products will be removed from all online platforms. Therefore, each company currently mentions ‘Country of Origin’ on its product.

I think this all information enough to understand.

5. Conclusion on Xiaomi is Indian company or not:

You must have read above that Xiaomi is not an Indian company.

I have also answered many questions about where the company’s products made.

I always write information about companies because people don’t know whether the company is Indian or Chinese.

Many people consider Indian companies to be Chinese and Chinese companies to be Indian. That is why consumers sometimes do not buy Indian products under the misconception that they are Chinese.

I always think that people should have the right information about the product. Therefore, I write about so many companies.

If you have any questions or concerns, please feel free to comment.

2 thoughts on “Is Xiaomi an Indian company? are xiaomi phones really made in india?”