Realme is not a very old brand, it has just been launched. So people have some questions about this brand like, is Realme a Chinese company?

Similarly, can we call Realme brand smartphones truly ‘Made in India’?

I will give full information about whether Realme phones assembled or manufactured in India.

Some people think it is an Indian brand. On the other hand, some consumers says Realme is not an Indian mobile company.

Along with Realme Company Details, I will try to clear your doubts about this company.

The subsequent anti-China segment of covid-19 has caused many Chinese companies to face difficulties in the market.

People were using social media and other platforms to tell people not to buy Chinese products.

However, Realme is one of the companies that was and will continue to be affected.

We will see this later in detail, but while reading, it is important for me to get your thoughts through comments, so feel free to make comment.

I would love to hear your response and I will try to write in a better way as you like.

Let us now turn to the main topic.

1. Is Realme a Chinese company?

Realme was a Chinese smartphone company that headquartered in Shenzhen. The brand launched in 2018 by Sky Li, Oppo’s former vice president. Realme was a sub-brand of Oppo that spun off from Oppo in 2018 and launched as independent brand in India.

You may not know it but Oppo, Vivo and Realme all come under the ownership of BBK Electronics. All these brands are subsidiaries of BBK Electronics, a Chinese multinational electronics company. you can check it on wikipedia.

Realme’s Smartphone facility has expanded to the Southeast Asia, Europe and the Middle East.

They have R&D unit, and gives thousands of jobs to Indian people but still most of the parts imported from China.

Madhav Seth is the CEO and co-founder of Realme India. Most importantly, India contributes 50% of RealMe’s global phones sold.

India is the business center for Realme, so most of the smartphones are first launched in India before being launched in other countries.

Consumer fails to recognize the brand origins by these Chinese companies ‘made in India tag’ and Indian startups.

That is why it is difficult for people to know whether it is an Indian brand or a Chinese one.

Further, we will also see why Made in India is written on a Realme Chinese Smartphones.

Realme launched in China in 2010 under the name ‘Oppo Real’. Prior to 2018, Realme was a sub-brand of Oppo Electronics Corporation.

After 2018, Realme became separate and an independent brand. Already these brands are working under the ownership of BBK electronics.

2. Is realme made in india?

Yes, made in India but not completely. As I said earlier, Realme’s phones are manufactured at Oppo’s manufacturing plants.

But Oppo manufactures most of its phones by importing parts from China to India.

If you look at it, it would not be wrong to say that Oppo phones are manufactured in India, which means they are mostly assembled.

So, Rest of the parts imported from china. Chips and other components cannot be manufactured in India due to lack of machines and hence it is not available here.

However, Chinese companies do not manufacture chips and other components in India but import them from China.

In the same way, most of Realme’s parts imported from china to India for making realme phones.

One thing to keep in mind is that lots of phones have the tag ‘Made in India’ but no one knows how many Indian parts it actually has.

In fact, after covid-19, most of the Chinese companies used this tag in their marketing strategy.

Now you may have understand, why I said ‘Made in India but not completely’.

3. Why Made in India is written on a Realme Chinese Smartphone company? 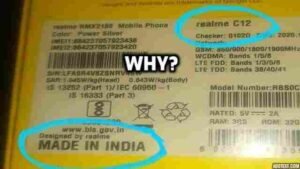 Whether the company is Chinese or non-Chinese, if they make the product in India, you will definitely see ‘Made in India’ on it.

Let’s get some basic information about Made in India,

Made in India – If any foreign or Chinese company manufactures or assembles in India at that time it is mandatory for company to write ‘Made in India’ on their product.

Samsung – south Korean company – manufacture products in India – So made in India.

Nowadays, when buying a product, the consumer wants to know the features of the brand as well as the country of origin.

Many consumers are willing to buy a product only if they know the country of brand and its details.

Hence the Indian government has made a rule to mention the ‘Country of Origin’ on a product.

Government E- marketplace has made mandatory for seller to enter the country of origin on product while registering on GEM.

You may have understood from the above information but if you have any more doubts or questions please comment.

4. Is Realme and Redmi Chinese company or both same?

Redmi is a series of phones from the Chinese company Xiaomi, and Li Jun is the founder, owner and CEO of Xiaomi.

Realme also belongs to a Chinese company but its subsidiary is related to bbk electronics.

So both Realme and Redmi belong to China but do not come under the same ownership.

5. Conclusion on Realme is Chinese company or Indian:

Well, after reading all the above information, people must have understood about Realme.

Many people do not want to buy many country brands. For example, people in India prefer to buy Indian brands.

To do all this, everyone needs to know the brand information first. In order to have information about any brand, it must be available in the most appropriate way.

Consumers get annoyed when they don’t get proper information about many companies. If you read the information on any site, you will find only partial or less understandable.

Hence, I decided to write about this topic so the right information would reach everyone.

As consumer you have rights to buy any product or not. So, you can decide your own.

Similarly, I have also written article about Oppo you can read it by click on below link,

I always like to reduce people’s questions and talk to them. You are my most important factor, so don’t hesitate to comment or ask.

Also, if you need information from me about any subject, please let me know.

2 thoughts on “Is realme a Chinese company? Is realme made in India?”