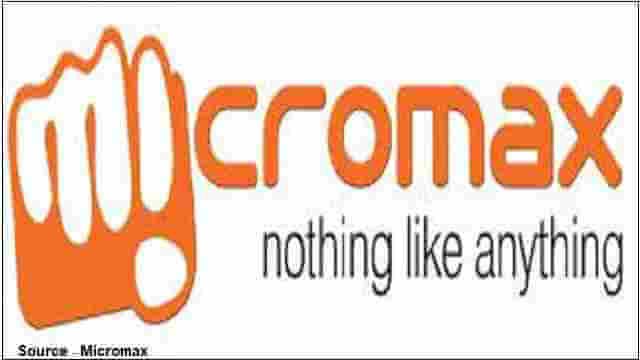 Is Micromax a Chinese company? Are Micromax phones made in china? know everything about Micromax company and new mobile launching details.

Currently Micromax making efforts on making made in India smartphones and working hard for it.

On the other hand, many tech gurus are spreading negative thoughts about Micromax smartphones.

All these so-called tech people on the internet are saying that Micromax Mobile is made in China and something is wrong.

Meanwhile, The truth is different but they are misinforming the Indian people in the wrong way.

In fact, for the first time, Micromax has made India and itself proud.

So, I don’t like people who spread negative thoughts about Indian brands. Therefore, I will tell you detailed information about Micromax Smartphones.

Also, the following question is frequently asked by people but after reading the article you will no longer have any such doubts in your mind.

That question is,  Are new phones of Micromax company Chinese rebranded?

The answer is No. how? I have explained in detail below.

Best recommended New Made in India Micromax smartphones to buy:

Let’s start the article with one by one point.

Table of Content
1. Is Micromax a Chinese company?
History and current updates of Micromax made in India company:
Micromax Company before 2014:
Micromax company comeback steps from 2015-2020 (Chinese to Indian made):
2. Is Micromax made in china?
2.1) Micromax imports from china?
2.1.1) Micromax company smartphones use Chinese parts or not:
Micromax IN note 1 and IN 1b parts:
# First thing – Rumors spread with a single invalid point (china parts)
# Second thing- Huawei Partnership with Micromax to Boost Its Offline Sales in India
# Last one – About the design of mobile:
Does Micromax company copy design of Chinese mobile?
3. Does Micromax manufacture phones in India?
4. Conclusion about Micromax is Chinese company or not :

1. Is Micromax a Chinese company?

Micromax is an Indian company which is based in Haryana, India. Rahul Sharma is the co-founder of this company and he has done a lot of development in last few years.

Micromax phones are not made in china and never be in the feature. It has manufacturing units in India.

Most importantly, their mobile manufacturing capacity is around 2 million per month.

Micromax has a total of three manufacturing units in India and also has Surface Mount Technology in operational condition.

In 2020, they have also applied for the government’s production linked incentive (PLI) scheme, which will raise the financial need for future development.

They launched two phones in 2020 and currently launched the Micromax in 1 budget Friendly smartphone in 2021.

Let’s see in detail the parts, history and current updates of Micromax phones.

History and current updates of Micromax made in India company:

Prior to 2014, Micromax was completely dependent on China. Micromax used to bring its phones from China and sell them in India under the name ‘Made in India’.

At the same time, Micromax was using about 70-80% Chinese parts in its mobiles.

Despite all this, in 2014, Micromax was the number one brand in India in the smartphone industry.

But going further, relying on China became Micromax’s biggest mistake. Because when China launched its 4G advanced Android mobile, Micromax realized that China kept us in the dark.

When Micromax came to know about this, the growth of Chinese brands Xiaomi (redmi) and Oppo had increased a lot.

Micromax could not be ‘upgraded’ quickly for several reasons. That is why Micromax failed.

Micromax company comeback steps from 2015-2020 (Chinese to Indian made):

After 2015, Micromax noticed all the mistakes. They understood that they no longer wanted to depend on China.

In the last four years, they have changed a lot to make their mobile.

Previously, Micromax did not have a research and development center, so the most important thing is that Micromax invested 500 crores for it.

Co-founder Rahul Sharma said, “This time we will use 50-60% of the material from India and the remaining material will be imported from different countries.”

When the government launched a PLI scheme, Rahul Sharma said, “Surely PLI scheme will help us to compete with Chinese brands on the pricing front.”

By reading this, you may have realized that Micromax is no longer solely dependent on China.

Hence, Micromax is an Indian company and not Chinese that founded in Delhi on 29 march 2000.

If you read further, you will understand why we should support Micromax.

2. Is Micromax made in china?

Some of the parts used in Micromax mobiles are imported from many countries of the world and not just from China. Not only that but the rest and most of the material is used from India.

Some parts like batteries, chips and glass are not imported from China alone.

At the same time, Micromax has given all the information about the parts to the people and this makes the company look honest.

Rahul Sharma, co-founder of the company, had said in a video posted on YouTube that the Micromax in note 1 has a battery Made in China and the Micromax In 1B has a Made in India battery.

There is nothing wrong with using a part Chinese, as Micromax is not completely dependent on China as before.

If you are really bothered by Chinese parts then how do you make a Chinese smartphone brand the number one brand in India.

A company like Micromax has to tell so much to people. On the other hand, when you buy a phone from a Chinese company, you don’t think much about it.

There will be a few more doubts about Micromax, so I’ll try to reduce them further.

I Already to tell you where Micromax was making mobile before and how dependent it was on China.

Then I will also tell you about the manufacturing, design and material of the new mobiles launched by Micromax in 2020.

From that, you will understand how much Micromax has developed at present and it is no longer dependent on China.

2.1.1) Micromax company smartphones use Chinese parts or not:

Ever since Micromax launched quality smartphones in India at lower prices than China, people who support China have started spreading negative thoughts on the internet.

Of course, Micromax now uses some parts from China and other countries, but there’s nothing wrong with that. Importantly, this Chinese part alone does not make whole Micromax mobile.

Not only Micromax but also Foreign and Chinese brands use parts from other countries. Because no one can make everything in their own country in the beginning. 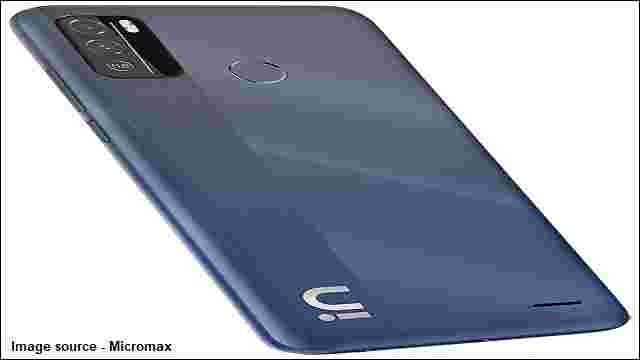 Micromax IN note 1 and IN 1b parts:

# MediaTek helio chip – made in Taiwan

Taiwan has told the whole world a thousand times that Taiwan is an independent country. This shows that the chip does not belong to China.

Because of this one part, these people are trolling Micromax. As I said earlier, one part does not make a complete mobile.

There is nothing wrong with using parts. But these people are defaming the Indian brand by giving wrong information.

There are a lot of parts but understand that not all of them are from China.

Micromax has made a lot of good things about it and also increased the manufacturing capacity. So don’t believe any crap story.

In the future, Micromax wants to make mobile fully with Indian parts and has started its efforts for that.

2.1.2) Rumor’s and Reality about Micromax mobiles:

Actually, those who consider themselves very technical are tarnishing Micromax’s reputation by claiming that it is made in China.

But nothing bad will happen to Micromax by spreading such fake news. Because we Indians will support the Indian brand.

There are a couple of things from which all this is being decided.

Let me tell you all about it. From that, you will understand everything. 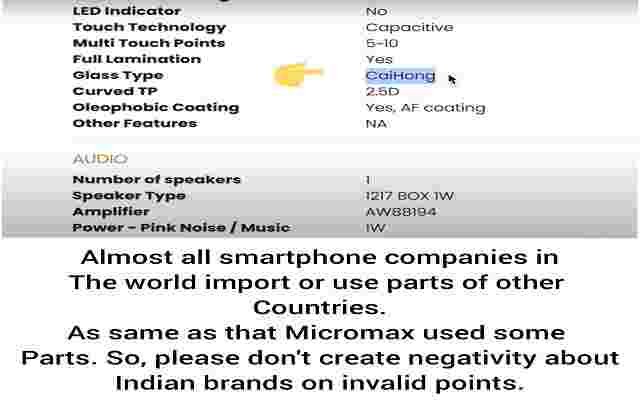 Micromax itself has given in its specification that the glass type is from China. So they did not hide anything from us.

Secondly, as in 2014, Micromax did not manufacture a complete mobile phone in China, but if it used 5-10% Chinese parts, then what went wrong.

However, Rahul Sharma did not say anywhere that mobiles are 100% “Made in India”.

On the contrary, he made it clear in his interview that initially we are using 50-60% Indian parts and we are preparing to make it 100% Indian in the coming years.

Hence, I’m saying that Micromax brand is deliberately targeted by some people.

All Chinese brands know that Micromax is no longer dependent on China. That is the main reason for spreading rumors.

In 2019, Huawei partnered with Micromax only to increase offline sales in India. This partnership has nothing to do with making a Micromax mobile.

The ‘marketing head’ of Micromax has clearly stated about it in the interview.

“There will be no co-branding. Micromax will continue separately when it comes to launching of own phones” said Deepti Mehra, marketing Head, Micromax informatics.

This means that Huawei has no relation with Micromax mobile manufacturing and the brand.

I think you have understood everything from this. But if you still have doubts, read the full article and you will understand what I am saying. Click here to read whole info on gadgets.ndtv.

# Last one – About the design of mobile:

Some people say that the design and look seem to have been copied. Those who say so are either foolish or ignorant.

Let me tell you, Micromax has not copied anyone’s look.

There are millions of mobiles in the market but it cannot be said that it was copied as it matches the color.

Secondly, when it comes to the camera, any mobile you see, its camera is square and this is the trend.

So Micromax has just followed the trend and made the design and look. They have not copied the design of any mobile.

On the other hand, Chinese brands copy all Foreign brands themselves and why don’t these people talk about it.

Therefore, we cant say Micromax phones is made in china.

3. Does Micromax manufacture phones in India?

Yes, there is no doubt that Micromax manufactures its mobiles in India.

Micromax has three manufacturing plants in India. They have factories at Bhiwandi, Telangana, and Rudrapur.

Due to a new plant like Telangana, the manufacturing capacity of their mobiles has increased to 3 million per month.

4. Conclusion about Micromax is Chinese company or not :

From above information you must have understood that Micromax is not a Chinese company and not only made with Chinese parts.

I think i explained almost everything in this article. So, its sufficient to resolve your all doubts about Micromax.

Now after reading this you understand that Micromax manufacture mobiles in India and it is not dependent on China like before.

Lastly i want say, don’t waste your time on deciding whether Micromax company phones Chinese made or Indian made.

If a company uses a part of another country, it does not become a brand of that country.

I think this is the first time that an Indian brand has entered the market in such a good way.

In fact, we should support that brand, but we are only asking questions to the brand that has come.

Making any device is not so easy, it requires financial help, setup, government support, and many more.

Not everything happens overnight or in one day.

So give some time to the Indian smartphone company Micromax. Also, don’t pay attention to false rumors.

All I can say here is that we are Indian citizens and it is our duty to support India.

In other words, if you support any Indian brand, remember that the support is for you, the country, and every citizen of the country.

2 thoughts on “Is micromax a chinese company? are micromax phones made in china?”